3 Fight Patterns Every Couple Should Know About

3 Fight Patterns Every Couple Should Know About

“It’s always the same. A fight starts and the next thing we know is we are yelling at each other and we can’t even remember what started it. What’s wrong with us? We just can’t communicate.”

I hear this a lot; most couples come in with communication issues.

When I ask them to elaborate, I am prepared to hear a common theme and am rarely disappointed.

What I so often find out is not that they can’t communicate. It’s that the way they handle conflict gets stuck and they aren’t able to get through to one another in those moments. It seems that most adults are fully capable of communicating when things are going well, but struggle to do so during conflict.

We simply are not taught how to fight well, fair or properly. So we often default to what we experienced growing up; what we learned to do from our families. Even worse, we are never shown how to resolve conflict when our fight or flight response is activated.

We simply are not taught how to fight well, fair or properly.

Most couples, when shown the dynamics of their unhealthy relationship dance and given a framework for their fighting pattern are able to make significant changes in the way they handle conflict together.

They can learn to deescalate on their own and actually stop themselves from escalating in the first place.

But first, they need to identify and understand their fighting pattern. 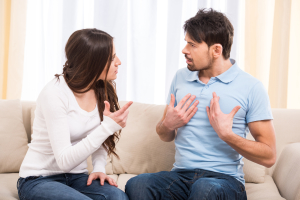 The second pattern can almost be more damaging than the first.

When couples are trapped in the blame game, they find themselves constantly throwing daggers at one another when fights erupt. Instead of shutting down and pursuing, they each go to their weapon belt and pull out whichever knife will best pierce their spouse. These can be issues from the past, or areas of vulnerability. When you have been together long enough, you learn where your partner’s soft spots are, and when caught up in the blame game, you can easily target those vulnerable points.

You know you are caught in the blame game when you are more concerned with telling the other person what they have done wrong or what they never do right or how they always fail you, instead of trying to hear what they have to say.

Your focus is on being right, making a point or simply shutting the other person down.

This dance will go on until someone gives up and walks away or both parties are so hurt and exhausted that they shut down and leave.

The blame game is so damaging because the daggers being thrown are real and even if not meant to hurt they often do. Couples trapped in this dance will say a lot of things they don’t mean or want to say; but nonetheless are irretrievable.

This pattern is our natural fight or flight response in action. And is the most common and difficult obstacle couples tend to experience and struggle with.

Any conflict can kick this off, and often it’s small issues that spark the fire.

One partner will make a statement, it could be critical or defensive, and that will trigger a response in the other person. They might go back and forth a few times, but at some point things will change for the worse.

Without realizing it, a process of shutting down begins and one spouse starts to withdraw. He has had enough, he feels like he can’t win. He is tired of it always going to this place so he decides to just “leave” the conversation. The individual who withdraws may stay physically present, but emotionally he has left the room. 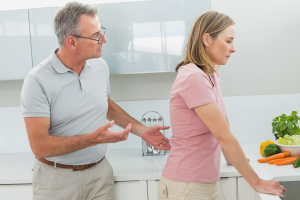 This triggers a reaction in the other spouse, and she reaches out and pursues him.

The pursuer will “feel” her husband “leave” but not actually realize what has happened. Terrified of being alone, she comes after him, usually by talking more, asking questions and trying to get through to him. But the more she does this the more he shuts down.

The dance continues until one or both of them are fed up, and they retreat to their separate corners. The fight is unresolved. One person is left feeling alone, the other is left feeling shutdown and protective.

Couples describe this pattern, this dance, to me all time. Stereotypically, men are the ones who withdraw and women are the ones to pursue. But it is often reversed. Both ways, the pattern is the same and the steps are the same.

When this dance has been entrenched for a while, it is difficult to change on your own. Couples who withdraw and pursue often feel stuck, and each individual feels alone.

Pattern 3: The Freeze and Free

The last pattern is signified by both parties shutting down, withdrawing and feeling alone. If there was a pursuer, he or she is tired of trying and is burnt out.

This is where each spouse has chosen to stay in their respective corners. No one is reaching out to anyone anymore and the relationship is characterized by a lack of engagement and even a lack of conflict.

“Why bother fighting? It won’t make any difference. I would rather just keep it to myself” is something I hear from individuals in the freeze and free fighting pattern.

If the couple doesn’t choose to reengage, to move towards one another, their relationship will continue to be defined by distance until the couple falls apart and it ends.

Although not the most intense of the three patterns, this is the most scary. This pattern denotes either an impending crisis, because two people can’t live isolated like this, or that a crisis already happened and they have simply given up.

The pattern can change. You can get unstuck and reconnect.

3 Steps to Getting Unstuck:

1. Develop awareness of your fight pattern

You also need to learn what you are feeling in those moments, and most importantly, what you need in your relationship. In your fights, what are you really trying to accomplish? Do you simply want to be right, or are you trying to get an unmet need met by your spouse?

I have found that most people are really looking for the latter. They have needs that haven’t been met and are trying to get them met in counterproductive ways. When you identify what you truly need you can then ask for that specifically.

2. Develop a vision for your relationship

Secondly, you’ll need a new vision for your marriage. What you have been trying hasn’t worked and you will need to find a new way to engage and handle conflict together.

Building on awareness, you two get to decide what you want things to look like. You get to choose how to interact with each other and what you want and need to communicate.

3. Develop a plan, and courageously move forward together

Many couples choose to do this before the first two steps are even developed. When a couple comes to see me for the first time, they are already acting courageously and taking steps to change their relationship.

Without having a plan or a vision, they have chosen to commit to their marriage and reengage with one another, even if they don’t fully realize it. This is critical to their success, and demonstrates the deeper love they have experienced and still desire together.

Awareness and vision are the catalysts for making a new path.

Awareness and vision are the catalysts for making a new path and actually taking it. 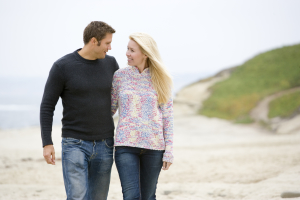 Fortunately there is hope for any couple caught in these patterns. But you can’t do it on your own; when you are stuck you need someone to hold up a mirror so your blind spots are revealed and a path of change can be taken.

If you are ready to get out of your destructive fight pattern, and courageously walk together towards a better relationship, take the first steps and get the help you need. Healthy relationships are possible and you two can learn to dance differently.

Ready to get out of your destructive relationship dance? I invite you to call me (720-588-2005) and sit down with someone skilled in helping couples learn to dance differently. Or you can schedule an appointment online today.

About the Author: Paul Steinke

A specialist in relationship and marriage counseling, I work in Highlands Ranch, just south of Denver, serving Douglas County and surrounding cities of Castle Pines, Littleton, Parker, Centennial, Englewood, Castle Rock and Denver. I focus on helping people have strong and life-long relationships, as well as traverse life's difficulties and problems.

Paul Steinke is a participant in the Amazon Services LLC Associates Program, an affiliate advertising program designed to provide a means for sites to earn advertising fees by advertising and linking to amazon.com.